Earth’s elusive masters tolerated only one planet-wide organization—the Scarlet Order of Men. Only the most favored of the People could enter the Institute, as children, to undergo rigorous training. Those unfit for the Order became Blue Brethren, servants and guides of the People, aiding and instructing them as loyal members of society, under the rule of the benevolent Trisz.

END_OF_DOCUMENT_TOKEN_TO_BE_REPLACED

I see Gondwane as it shall be in the untold ages of dim futurity, near the time when the Earth shall be man’s habitation no more, and the great night shall enfold all, and naught but the cold stars shall reign. The first sign of the end ye shall see in the heavens, for Lo! the moon is falling, falling. And there shall come a man into the lands, a man not like other men, but sent from Galendil.

The name of the man is Ganelon Silvermane—and this is the first of a new marvel-adventure series by Lin Carter.

END_OF_DOCUMENT_TOKEN_TO_BE_REPLACED

It comes from beyond the fifth dimension―an alien intelligence both invulnerable and totally evil.

Its aim: bring the universe to its knees. Its primary objective: destroy the Solar System.

As doomsday rushes ever closer, one lone man dares oppose the creature from beyond. Only he can save the universe from a brutal, blazing cataclysm.

END_OF_DOCUMENT_TOKEN_TO_BE_REPLACED 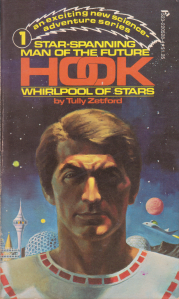 The century is 10,000, Earth dating. The boundaries of the world as we know it have expanded beyond belief, beyond thought. Earth still remains―but as one of many planets throughout the galaxies, where myriad life forms exist.

Life has taken a new direction, to a new future, but there are still problems to overcome―and the same struggle for survival.

And Ryder Hook is just one Earthman who is equally at home on a starship, on an alien planet, and on Earth. But he has been singled out for a purpose―to take place in a singular experiment…

This is the first novel in a spellbinding new science-adventure series about a superhuman warrior of the future. Ryder Hook travels through the cosmos as a master of all he encounters. He is a man of supreme adventure, timeless in his fearless conquering spirit! Watch for further books in the action-packed saga of Ryder Hook!

END_OF_DOCUMENT_TOKEN_TO_BE_REPLACED

Brigands of the Moon by Ray Cummings

A pioneer of imaginative writing, Ray Cummings is one of the founding fathers of modern American science-fiction. For in his novels and short stories, this talented writer—once an associate of Thomas Edison himself—first originated many of the soaring conceptions that became part and parcel of all science-fiction since then.

Cummings spanned the gap between the early gropings of H.G. Wells and the full vision of our atomic future. His vivid tales were the first to fully explore the cosmos from the interiors of atoms to the farthest bounds of the galactic universe.

BRIGANDS OF THE MOON is one of Cummings’ classic novels—a thrilling novel of the clash of two planets in the fight for super-power ore, an adventure in interplanetary piracy, and a prediction of the mining and colonization of the moon that is still as timely as the day it was written.