The Godmakers by Don Pendleton
Pinnacle Books, 1974
Originally published in 1970
Price I paid: none

Patrick Honor was possessed by PPS, Psychic Power Sources, which led him, even though he could not understand them. Beyond understanding was feeling, beyond feeling was knowing. Patrick Honor knew only that he had to go on.

He had to explore the unknown, to escape his body, to travel to the root octave of the Ninth Parallax. And he had to find Octavia, the unearthly beauty who beckoned him from another world.

There was so much to learn. What was the real power source? Was it sex, or science, or…love? What was the meaning of the number nine? Why was the President of the United States going to die on June 15, 1975?

END_OF_DOCUMENT_TOKEN_TO_BE_REPLACED 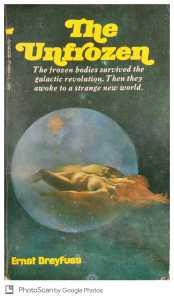 They lay together through the mist of countless centuries, while the Earth, the galaxy, the infinities of the universe shifted and resettled and changed again. When they awoke it was to an existence tranquil yet hideous, where human emotions had no place. Their love-making was viewed with suspicion and disgust. Now they were the outsiders, the throwbacks. Yet, with all their human imperfections, they were the only hope for a dying civilization.

END_OF_DOCUMENT_TOKEN_TO_BE_REPLACED 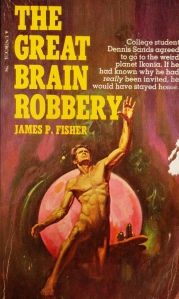 Dennis Sands was just another college junior. Then, he learned that he had strange psychic powers valuable and needed on another planet. He agreed to travel to Ikonia, even though he didn’t trust Cynnax, disguised as a professor, who revealed his true identity as a being from another world in a distant solar system, a world that was on the brink of extinction. When Dennis got there, he realized why his psychic powers were treasured. And that the evil Cynnax and his perverted band planned to rob him of his brain.

END_OF_DOCUMENT_TOKEN_TO_BE_REPLACED

Capt. Alex and his team had been computer-selected to explore the sun-twin planet Cygni C. They found there a race of men who wiled away their lives playing childish games, making love, and vegetating in the deep, luxuriant jungles. Alex’s friends quickly succumbed to the planet’s many delights. Only he felt duty-bound to return to earth.

END_OF_DOCUMENT_TOKEN_TO_BE_REPLACED 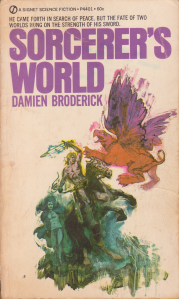 Klim Xaraf, son of a nomadic chief, awoke from his monumental fall to find himself the prisoner of time―trapped a thousand million years in the future.

Around him was a dying world, its incredible power sucked by necromancers through a hole to the past…it’s cities preserved in stasis, awaiting his liberation, or their final doom.

Yet Klim could neither meet his world’s challenge, nor conquer the wizards of his own, until The Powers primed him for the battle. For with their knowledge, they would erase his memory and plunge him into a nightmare training ground…where all the wonders of tomorrow were the forgotten souvenirs of an ancient yesterday.

END_OF_DOCUMENT_TOKEN_TO_BE_REPLACED

Can a human being be reconstituted like orange juice?

To find out, the Army backs a futuristic research project that transfers a man’s personality onto computer tapes. Guinea pig for the experiment is technical writer and dreamer Bob Shairp.

But the project barely gets off the ground when a computer accident wipes out Shairp’s mortal body and only his tapes remain. Is Shairp doomed to this encoded state forever? Or can the bizarre process be reversed?

END_OF_DOCUMENT_TOKEN_TO_BE_REPLACED

The Cruachan and The Killane by Cristabel
Curtis Books, 1970
Price I paid: 75¢

Nora Castonay is a breathtaking blonde endowed with a miraculous psychical gift of healing the sick. She also has an uncanny gift for getting into all kinds of trouble.

First, aboard a doomed aircraft a dying courier entrusts her with secret information to deliver a mysterious man named Vanor. Next, rescued after the explosion of the plane by a ship, The Cruachan, she falls in love with its enigmatic captain, Killane.

Then, as she finally nears the mystic island of Veltakin, she comes face to face with the ultimate, universal terror—

END_OF_DOCUMENT_TOKEN_TO_BE_REPLACED

Magellan is the last city-state on earth—a society where perfection is being rapidly approached. It is the Eve of Eternity—the day when the great computer complex Chronophage will assume dominion over the earth and grant every man his wish.

Euripides Che Fourthojuly 1070121, who has been avoiding the tranquilizing drugs all are required to take, will be in for a very bad time indeed….

END_OF_DOCUMENT_TOKEN_TO_BE_REPLACED

The Steel Crocodile by D.G. Compton

IN ANSWER TO AN UNANSWERABLE FUTURE SCIENCE HAS CREATED BOHN…

Bohn, the omnipotent computer whose flashing circuits and messianic pronouncements dictate what tomorrow will—or will not—be.

But Matthew Oliver is flesh and blood and full of questions—not nearly as certain as the machine he’s appointed to serve.

END_OF_DOCUMENT_TOKEN_TO_BE_REPLACED

Whisper from the Stars by Jeff Sutton 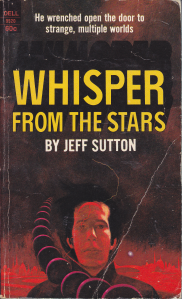 Nights are the worst.

Those cloudless nights when a thousand eyes look down, mocking me. Because I know that Man, in some form other than my own, quietly has taken over the universe.

I know because I’ve lived and died and lived again.

Worse yet is when the whisper comes.