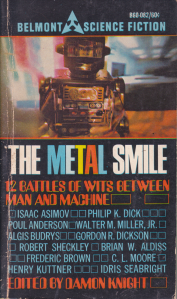 Stop me if you’ve heard this one:

Some scientists make a giant computer that will solve all the mysteries of the universe. After countless years of refining, developing, and building, the computer is finally turned on. The scientists ask it the first fateful question: Is there a god? The computer processes for a bit, and finally answers: There is now!

I’m sure this particular Shaggy God Story has been replayed dozens of times, if not more, and I have no idea what the first one was.

Isaac Asimov once pointed out that, over the course of his life, people would come up to him and tell him a joke they heard that they thought he might like. They would then tell this story, or a variant of it, to which Asimov would respond by howling in rage.

“I wrote that story!” he would holler, I’m told, by him, in Isaac Asimov’s Treasury of Humor.

Well, Isaac, I hate to break it to you, but Fredric Brown beat you to “The Last Question” by two whole years. And―to be honest―he did it better.

Asimov’s story rambles a bit. Imagine that, right? Anyway, it takes him a lot longer to get to his punchline. I don’t have a wordcount handy, but it’s about seven or eight pages, detailing something like a trillion years of human history. It’s a fantastic story, don’t get me wrong, and Isaac was right to consider it his favorite one that he’d written. You can find it in pretty much any collection of Asimov’s short stories, and knowing him, he probably found a way to work it into his Guide to Shakespeare or Annotated Gulliver’s Travels.

Fredric Brown, on the other hand, mashes the whole thing into a page. I was able to read the whole story in about a minute. I even counted the words, and it clocks in at about 150. It’s short, it’s succinct, and it’s perfect.

Brown’s story is a minor twist on the “giant computer” theme. It’s not actually a single computer. He posits a network of computers, connecting all the calculating machines across the inhabited galaxy. It’s a damn shame Brown didn’t live to see the explosion of the Internet, where instead of using it to create God we share cat pictures and argue about why the new Star Trek sucks.

To make it even better, Brown’s super-Internet connects the computing power of an inhabited ninety-six billion planets. That’s the kind of big-picture science fiction that I love.

And Brown’s story differs from Asimov’s in the delivery of the punchline, too. I’m not sure which one I like more. I think they’re great in different ways. Brown’s finale is a mighty “There is now!” which works in the same way that the rest of the story does. It’s to the point, with no ambiguity, and you don’t really have to do much thinking to get it. Asimov’s is a bit more epic, with the computer lasting long after its creators have died, processing the answer to the question. Once it finally figures it out, it laments that there’s no one to tell the answer to, so it says “Let there be light!”

Asimov’s punchline takes a little bit longer to get. Not more than a couple of synapses longer, mind you, but it’s there. It also brings us that feeling of whoa, what happens next?, whereas Brown’s story is done and done.

I love the intersection of speculative fiction and humor. Of course, like any humor, it can be very very lazy and bad, but when it works, it’s among my favorite things in print. It’s interesting to me how many short short stories in the genre turn out to be jokes, though. 100 Great Science Fiction Short Short Stories, edited by Asimov, Martin Greenberg, and Joseph D. Olander, is just chock full of the damn things. It’s a testament to the short short story, or flash fiction, or whatever you want to call it, as an art form that can make you finish a story with either a hearty guffaw or a terrified ohhhhhh shit or both. I highly recommend it.

I don’t see much longform humor in sci-fi and fantasy, though. Yes, before you @ me, I am well aware of Douglas Adams. He consistently nails it. And Terry Pratchett is my favorite author. I am aware of him. But other than those two, I can’t think of any humorous novels that actually work. I know it’s a tall order comparing anybody to Adams and Pratchett, but I can’t even think of sf/humor that has made me laugh half as much.

And that’s not to say that sci-fi can’t be funny, and the style pendulum seems to be swinging in the direction of injecting humor into stories lately. John Scalzi writes some really funny books, but he’s not writing humor, and that’s what I’m talking about. James S.A. Corey fits that bill, too. On the fantasy side I’ve really enjoyed Richard Kadrey lately, and Jo Walton’s Thessaly trilogy made me crack a wry smile here and there. There are plenty others that I’m forgetting about who write serious science fiction novels that can make you laugh, too.

(Thank you for reading my latest blog entry: Books I’ve Read Lately That I Liked.)

But it’s practically a cliché that the great big epic classic works of yon are humorless. Maybe it’s because the jokes don’t translate well across the last fifty or so years. That might be on me. But if you can find me a joke in The Lord of the Rings or Dune, I’ll happily admit I’m wrong.

Even Stranger in a Strange Land, which has this whole little subplot where Valentine Michael Smith learns to laugh, is distinctly not a funny book.

Then again, I also can’t think of any funny short stories by Tolkien or Herbert or Heinlein, so perhaps this is an author thing and not a story construction thing.

Anyway, I think I’ll open up the floor now. What are some favorite ha-ha funny―and good!― science fiction and fantasy novels, short stories, and in-between? Bonus points if you can prove me wrong about classics always being dour and serious.

I think we could all use some laughs these days.