The Uncensored Man by Arthur Sellings

Dr. Mark Anders was one of the government’s top physicists, working on a high priority project concerning defense. Wrapped up in his abstract world of mathematical symbols, he was ill-prepared for the messages he began to receive. They were in words of other languages…and they came from strange sources: the babblings of an epileptic in a fit; the output sheet of a new super computer on a test run.

But this was only the beginning, for he was soon to find himself transported to a different dimension, setting foot on another world, whose people had been desperately trying to contact him in order to deliver a message terrifying in its implications for the future of the human race…

END_OF_DOCUMENT_TOKEN_TO_BE_REPLACED 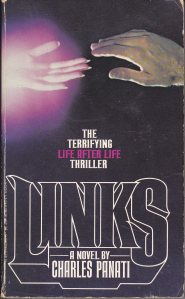 They were the first to visit the afterLife and then return, their souls hypnotically “linked” in a dramatic new experiment in temporary death. Then something went wrong. Hideously wrong. And psychologist Ben West was faced with the most awesome terror that had ever been experienced by a living being, as he went after the woman he loved. All the way to the Other Side.

END_OF_DOCUMENT_TOKEN_TO_BE_REPLACED

The Mountains of the Sun by Christian Léourier

Berkley’s International Science Fiction program is proud to introduce France’s premier young s-f master with an adventure in Earth’s future. After the catastrophic death of civilization, human colonists of Mars return to “the mother planet” to discover a primitive society operating in bloody conflict with nature. The planetwide adventures of this group of colonists—grown soft and decadent in the artificial, low-gravity colonies on Mars—is one of the most exciting adventures of today’s international world of science fiction.