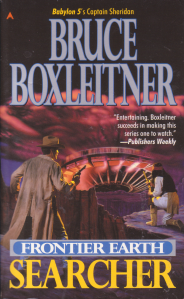 Bruce Boxleitner, best known for his role as Captain Sheridan on the hit television series Babylon 5, crafts a thrilling science fiction adventure featuring Earth’s first contact with an alien species―not on the final frontier of tomorrow, but on the wild frontier of yesteryear…

Well, folks, I got around to it! I read Bruce Boxleitner’s literary debut more than a year ago. Hard to believe it’s been that long! At the same time that I got that one, I found its sequel, and intended to review it not long after I did that one. I guess I got sidetracked by another fifty or so books.

It looks like they changed up the uber-short back jacket copy this time. The back cover is still just a big picture of Tron dressed up in a snazzy space uniform, but the text is different. You’ll note that the publisher felt the need to throw the words “final frontier” in there, which is just…c’mon. That’s Star Trek‘s thing. I know the phrase predates it, but still. On the other hand, they contrasted “final frontier” with “wild frontier,” so it gets point for that. More points accrue for rhyming “frontier” with “yesteryear.”

The inside of the book is, well, a lot more of the same. It’s not bad, but it’s not great. It’s perfectly readable, but it didn’t have a lot of weight to it. Not saying I expected the book to change my worldview or anything, but nevertheless, it was pretty hard to get invested in the characters or the plot.

Still, like its predecessor, the book hinges on a sort of Secret History narrative, which is a thing I tend to enjoy. This one didn’t revolve around a big, well-known event like the Gunfight at the O.K. Corral. I don’t know if the events of this book actually took place in real history or not. I guess I could look it up…

Okay, I’ve confirmed that it’s set in a real place. That’s apart from places like Tombstone and Tucson, whose existence I did not need to verify.

I can’t find any reference to the book’s Lost Bennett Mine and the battle that took place there, but I haven’t looked very hard. Maybe somebody with a better knowledge of the Old West than I have can let us know.

Our hero, John Macklin, has not changed much since the last book. He also didn’t change much from the beginning of the last book to its end, and likewise doesn’t in this book, either. That’s probably what caused me to get bored with him so quickly. I don’t feel any connection to him. All he is is an extraterrestrial with amnesia and an AI implanted into his chest that doesn’t work reliably. He doesn’t learn, he doesn’t grow, he’s just…at places.

The book starts with some real history. Some months after the famous Gunfight, Morgan Earp is shot in the back while playing billiards in a saloon, presumably by someone associated with the Clanton gang. His brother, Wyatt, and associated others ride off to avenge his death, assuming that the courts won’t handle it to their satisfaction.

In the book, Macklin is there when it happens. He’s also looking for some excuse to get to Tuscon, since another member of his not-Federation is hanging around there and he hopes to get some information. Since the Earps are taking a train that way with their dead brother (and onward to Colton, California, where Morgan is buried IRL), he tags along.

The Earps leave the book pretty early, but that doesn’t make things any easier for our protagonist. The bad aliens, the Kra’agh, are still around and doing some mean, nasty, ugly things. There are also problems with the local Apaches that might lead to all-out war.

Did you know that hostilities related to the Apache Wars lasted from 1849 to 1926? I just learned that.

We see a lot of the book from the point of view of the Apaches, or N’de. They’re treated sympathetically, which you might expect, but what I was happiest about is that they were treated like actual humans. They’re not all good, wholesome, live-off-the-land, use-all-of-the-buffalo spiritualist wise men elf people. Boxleitner, or rather his ghost writer, William Keith, Jr., actually did some research and tried to portray them accurately. Did he succeed? I honestly can’t tell you one way or the other. I know very little about America’s First Peoples, to my enduring shame. But it feels like he tried, and that counts for something.

The conflict between the white settlers and the Apache has come to a head over a particular mountain near Tuscon. There’s a rich silver lode under that mountain and the whites are out to find it. The Apache, on the other hand, believe that the mountain is home to some of their gan, which are somewhere between spirits and deities.

In the meantime, Macklin is trying to find this guy, Apache Slim. Apache Slim isn’t an Apache, he’s just a guy who had the temerity to suggest people treat the Apache like people. Before Macklin can catch up to him, though, Apache Slim is killed and gets his brain eaten by a Kra’agh who probably goes by the name Death-Deather or something. They all had names like that.

So in the last Boxleitner review I pointed out that I never got a good mental image of what the Kra’agh were supposed to look like. In the first book, I sort of pictured them as big centipedes, or lobsters, or some kind of arthropod. I suppose this just reveals some of my own prejudices (lobsters creep me the eff out). Anyway, this book did a better job of telling us what these aliens look like, or maybe I just read it better this time.

So they’re not insectoid or arthropoid or whatever. They’re actually shaped something like centaurs, except instead of people heads, they have snake heads. They also have lots of claws, and a big hairy bump on their back where they keep their brains.

Most of the time, though, they just use their technology to look like regular people, even though that technology is far from foolproof. Macklin sees right through it every time.

The Kra’agh want to take over the Earth and use it for a combination nature preserve and hunting ground. Apparently people are delicious.

There’s a lot of stuff going on in this book and Macklin gets sucked into it all. There’s a power struggle among the local Apache. There are white people (always a problem). There’s a woman who’d like nothing more than to get away from all this crap. There were about five different plot lines and I think that maybe one or two of them could have been done away with, but that’s something I only think after having finished the book.

All of those plots converge in the action-packed conclusion to the novel. It turns out that the Lost Bennett Mine that all the white people are looking for is the current whereabouts of the Kra’agh ship. Macklin convinces the Apache and the white people to leave each other alone and share the mountain if they can team up and take down whatever’s in the mine. They agree to this.

The Kra’agh have captured two women (because of course women have to be the MacGuffin…sigh) which raises the stakes, I guess? They’re trying to lure Macklin in so they can kill him and eat his memories. Macklin goes to meet them and it turns out that there are a lot more Kra’agh than he anticipated. Some various cavalries arrive and there’s a big to-do. Eventually the Kra’agh ship comes out of the mine and starts shooting around.

The way Macklin takes it down is pretty good. See, somewhere near the middle of the novel he got his hands on one of the Kra’agh’s laser guns. He never figured out how to work it, and his fiddling actually caused the thing to explode, presumably because he entered the password wrong three times in a row.

And that’s our Chekov’s Gun! Chekov’s Exploding Gun! Macklin grabs hold of another one of the laser guns, enters ADMIN123 too many times, and then chucks it at the ship. I think the ship had a door open or something. Either way, it blows up and the day is saved.

It’s a hook for a sequel that never happened!

I’m kind of disappointed by that, honestly. This series is just decent enough to make me want to see its conclusion.

Like the first book, this one deals with culture clashes. Whereas in book one it was all about East vs. West, Law vs. Freedom, and so forth, this one deals with the much more typical Whites vs. Indians. It’s not anything new, and it doesn’t bring much to the table that we haven’t seen a bunch before, but it was at least respectfully done.

Again, it’s not this group are the heroes and that group are the villains. I mean, yeah, I think we can all agree that, historically, White People Ruin Everything, but they’re painted with a sympathetic brush in this book. Most people are just trying to survive.

And the Apache aren’t all Chaotic Good elf druids, either. There’s a power struggle between one group that wants to make peace with the whites and another that wants to exterminate them. In fact, the white people are also divided into two very similar groups, just with a different target for the argument of genocide.

You could argue that the Kra’agh are also just trying to survive, but it’s harder to view them sympathetically. I mean, they literally eat pain. Their own pain gives them alien orgasms. Still, they can’t help the way they evolved. They’re apex predators. Apex predation is what they do. Their main flaw is that they don’t view anyone apart from themselves as truly sentient.

JUST LIKE WHITE PEOPLE THAT’S THE MESSAGE ALL ALONG

Still, there are several moments from the Kra’agh point of view where they look at something humans are doing to one another and think, “Well, we might eat people whole, but we’re not that cruel.” And they kind of have a point.

So yeah, you can read this one or leave it where it lies. It’s a better western than it is a science fiction novel, even if the story is pretty standard itself. I’d get more enjoyment out of Louis L’Amour or Zane Grey, but that’s just my cuppa.