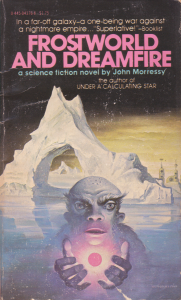 Since the beginning of time, the Onhla tribe had flourished amid the dramatic extremes of heat and cold on the planet Hraggellon. But now the race was on the verge of extinction.

Within its ranks, a mysterious, murderous malady was running wild. Meanwhile, from another galaxy, the spearhead of an all-conquering empire had made its initial penetration.

Only one hope remained. A youth name [sic] Hult, newly emerged into humanoid form after his animal childhood, and beginning a desperate, daring quest for the elusive key to survival that would take him to the most perilous regions of his world―across the unknown reaches of outer space―and into the most secret and startling depths of himself….

It’s become increasingly common for me to read a book and then discover that I’ve already read another book by that author. I don’t know if it says more about me or the author in question, but there you have it. In this case, though, there’s an added element. Not only have I read John Morressy before, I’ve read another book set in the same universe as this one: The Mansions of Space. Each of these books also share a universe with Morressy’s Del Whitby trilogy, but these two books don’t have any characters in common with it or each other.

What they do have in common are a galactic empire called the Sternverein, a liberal usage of time dilation effects to make the story jump further into the future, and lying-ass back covers that completely obscure the tone and meaning of the story. While the synopsis of Frostworld and Dreamfire wasn’t as bad as most, I do want to point out that it falls into what I call the Trap of Scales, being that it asserts the “all-conquering empire” comes from “another galaxy,” and there is no evidence that these books take place in anything more than one galaxy. C’mon.

Looking back at my review of Mansions of Space, it would seem I had some problems with that story. Of course, I don’t take any of them back, but this is another case where it seems I found one of the author’s weaker tales first. Frostworld and Dreamfire, while not what I’d call a masterwork, is a stronger story and better told.

I like stories where the point-of-view character is an alien, and Morressy did a good job of doing that in this story. Our hero, Hult, is an Onhla. There are some interesting things going on with this species. They have three stages of life which all have alien-sounding names that I don’t remember. The important thing is that the first stage is basically an animal of some sort, the second is a ripped humanoid, and the third is an even more ripped psychic humanoid. The third stage has never been observed by humans, who consider it a myth.

We first meet Hult as he’s emerging from the animaloid state into adulthood. He’s the last of his species, the rest having been killed off by some mysterious illness.

There’s some POV-hopping in this book. For the first half or so of the novel, it jumps between Hult and a human trader named Dunan. Dunan works for the Sternverein and is hoping that this crappy planet, Hraggellon, might have something to make his visit worthwhile. Hraggellon has little going for it.

I’m trying to figure out how this works: Hraggellon is tidally locked, so its year is the same length as its day. A bit at the beginning says that due to its axis and eccentric orbit, the planet has one side always facing away from the sun. Okay, I get that. That makes sense. The thing that’s weird to me is that the other side, the one where humans live, has a very long day/night cycle. I feel like I’m missing something here.

Hult lives on the starry side of the planet, where it’s always cold. Humans live on the cycling side of the planet, where they hunker down for the long nights and do all the important stuff during the long days. The humans have recently undergone a change in power, with some guy named Orm taking over. He’s a bad dude, who is solidifying his regime by persecuting a group of people called Remembrancers, folks who make it their job to, well, remember things. There’s no written language on Hraggellon, so the Remembrancers are the folks who witness verbal contracts and so forth to make sure there’s a record. They also keep track of history and legend. There are lots of names for the kinds of Remembrancer, but the only one I remember is lildode, because it sounds like dildo a bit.

This book shares a weakness with a lot of other books, and I bet you’re starting to see what it is. There’s more setup here than story. Yeah, having a good setup for your book is important. Make it distinctive, make it clear, make it consistent. This book does all that and it does it pretty well. And while the real meat of the story here is a lot better than, say, The Day of the Klesh, I still got the feeling that it was on the back burner while the real universe-creating was happening.

Okay, so the story. There’s an animal on Hraggellon called a gorwol that has fur of incredible softness and luxury. Seb Dunan, a trader, wants some pelts. Only the Onhla know how to hunt gorwol. Everybody thinks that the Onhla have all died out. They also think that the gorwol have died out. Dunan thinks differently. He sets out to find an Onhla and he eventually meets Hult. They make an agreement: Hult will bring Dunan some gorwol skins in exchange for a space-trip to the planet Insgar. According to stories, a group of Onhla were taken to Insgar many years ago. Hult thinks that he can find someone there with whom he can travel back to Hraggellon and repopulate the species.

Everything goes pretty well up to this point. Hult fetches some gorwol skins and Dunan takes him to Insgar, where there are in fact some Onhla for Hult to meet. Hult finds a mate and meets some animals called koomiok (oh, I forgot to mention that Onhla can talk to animals), and they all travel back to Hraggellon. On the way there, though, Dunan dies. His assistant, Clell, is a jerkass, and he tries to force Hult to change the deal. Hult and his new family escape.

The story jumps into the future a bit now. Clell has just arrived on Hraggellon again after being away for a long while, thanks to time dilation. The original Orm has died and now his grandson, also called Orm, is in charge. He’s even worse than his grandfather. The Remembrancers are all but wiped out; the remaining few have either fled the city or set themselves up in Orm’s court. Hult has raised a new tribe and has ascended into the rare third stage of Onhla life. He’s gotten much bigger and has a psychic connection to other life forms.

The Onhla are routinely described as something like “majestic,” which makes the picture on the front cover of this book pretty hilarious. I assume that guy is supposed to be Hult or someone like him, but c’mon, he’s anything but majestic. He’s the goofy-lookin’ reason I was given this book in the first place.

Clell is obsessed with two things: gorwol pelts and revenge. He was injured in Hult’s escape, and there’s this whole “nobody insults the Sternverein” kind of thing going on. He, Orm, and some soldiers venture to the night side of the planet and find the remaining Onhla, massacring them and capturing the young, figuring they’ll be able to raise them up to hunt gorwol. Hult isn’t there for this turn of events, but because he’s now connected to everything psychically, he feels it happen. His species is, once again, almost wiped out.

One thing I’ll say about this book, it wasn’t not afraid to take turns I wasn’t expecting. I figured things would be a struggle from here on out, sure, since there was another third of the book or so remaining, but I didn’t expect the author to basically undo everything he’d done up to this point. I’m impressed.

The climax of the book isn’t great, though. I was expecting a lot of killing by an alien yeti monster. Instead it just turns out that Hult projects pants-shitting fear at the raiding party, which causes the animals and some of the people to do crazy things, leading to their own demise. As an exception to that, there are the Sternverein soldiers, who undergo an emotion-dulling procedure as part of their training. Again, I thought there’d be a fight, but Hult just does some other kind of psychic thing that causes them to get lost in the snow and die or something like that. There’s no action climax.

Hult finds his remaining kids, but once again the story takes a turn for the dark. They succumb to the same sickness that killed all the other Onhla and die. It’s never specified, but I got the feeling that the sickness is transmitted by humans in some way. I don’t think it’s intentional, I think it’s more of a War of the Worlds type thing. Again, that’s never stated explicitly, so I might be way off.

The book ends with Hult meeting some remaining Remembrancers and joining up with them, figuring at least the history of his people can be kept alive in their memories.

Okay, so that’s the book. Again, not anything super great, but it had a good backstory, at least. The circumstances of the book were well done, the aliens were original enough, and the writing was crisp and well-paced. There was a lot of exposition but it didn’t come off as annoying.

If I had to complain about Hult and his people, I’d say that they didn’t seem quite alien enough. Sure, they were alien in form, and there was some “feeling like that was the human way of doing things, not Onhla,” but in the end Hult’s motivations and reactions were exactly what you’d expect of a human. Not always―there were certainly moments where Hult felt like an actual alien creature―but often enough he just felt like a human with superpowers.

If the book had stuck with Hult’s point-of-view more consistently, I think it would have fared better. His bits of the book were the ones that were interesting to me. When it shifted to a human POV, I cared a lot less. Seb Dunan was a decent enough guy, but he didn’t have nearly as much personality as our alien protag. I didn’t feel super sad when he died, it just felt like a way of getting his good-for-nothing sidekick into the spotlight so he could screw everything up. It felt more like a plot hook than the expiration of a character.

Still, the book had more good bits than bad, and it was leagues better than the other Morressy book I’ve read. It felt like it had more of a point to it, for one thing, and the narrative was tighter. It might have been strictly middle-of-the-road fare, but I’ll take it.