The Texas-Israeli War: 1999 by Jake Saunders and Howard Waldrop 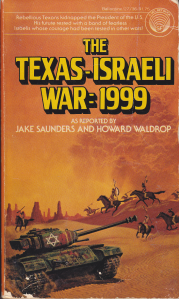 On August 12, 1992, England’s tiny nuclear arsenal fell on Ireland, on South Africa, and finally on China. Instantly the planet went up in flames. In the first half of what was to be called the War of ’92, half the Earth’s population perished.

The United States was reduced to a vast underpeopled land—and, to make matters worse, Texas had seceded and taken her precious oil reserves.

But Israel, virtually untouched in a world ravaged by war, was painfully overpopulated. So Sol Inglestein and Myra Kalen had come to America looking for a place to settle. As mercenaries on the side of the Union in its war with Texas, the Israelis had been promised land in exchange for their services.

Leading their bedraggled troops into the heartland of Texas, Sol and Myra head up Operation King, Mission: Rescue the President of the United States!

This book was chosen this week because, like its predecessor, it takes place in the far future world of 1999, where everything has gone to crap! Were we really that cynical about the future back in the seventies? Did we really think that we’d manage to destroy most of the world before the millenium rolled around? I want to talk to my mom about this at some point. At the time this book was written, she would probably have been a teenager.

Okay, mom has been texted. I’ll let you know what I find out.

Anyway, this book was far, far better than last week’s depiction of the turn of the century. I really didn’t expect it to be when I bought it. I thought it was going to be ridiculous in the extreme and possibly condoning some kind of fringe political opinion of which I might not have been previously aware, which is always fun because I practically collect ridiculous fringe political opinions.

Me: I’ve just read two books in a row from the seventies that depict the year 1999 as a nuclear wasteland. Were y’all really that cynical about the future back then?

Mom: I wasn’t. I don’t know about everybody else. I was too busy going to school and having a good time with my friends. Maybe they felt that way in big cities, but it was not that way in backwoods Cherokee County!

So either people in rural America just didn’t have Cold War fever or any future looks brighter when viewed from a small town in northern Alabama. Take your pick of interpretations.

This book was not an advocation of some crackpot Cold War opinion. It wasn’t even all that ridiculous.

See, the War of ’92 started when Irish Extremists put LSD in the London Water supply, causing Parliament to go temporarily insane and launch nuclear weapons around the world. Completely plausible.

What followed was essentially a retread of World War I, where alliances and pacts and old rivalries led to pretty much every nation launching something nasty at every other nation. The word decimation literally means to destroy one-tenth of, so that word isn’t appropriate for this case. We need a word for not destroy one-tenth of. 90% of the American population was wiped out. This left the country, as you might expect, in a bit of a bind. Now it’s seven years later and the State of Texas has seceded. The American government will not allow this to stand, and so they’re waging a war with them.

Unlike most of the world, Israel stayed out of the conflict. They had more pressing issues, I suppose, like their own constant struggle for national survival. Israel is, in fact, dangerously overpopulated. Enter here our heroes, Sol Inglestein and his girlfriend Myra. They’re Israeli mercenaries, fighting for the United States for the promise of money and land.

Because the American government always lives up to its promises where land is concerned, right?

Sol and Myra run a tank division. They’re using state-of-the-art technology, years in advance of what the Americans have, because they haven’t wasted it all in fighting commies. Their tanks have gatling lasers, guys. Gatling lasers in the year 1999! Sometimes I wonder if these depictions of a post-apocalyptic near-future are, in fact, all that cynical. They usually tend to overestimate just how far technology will go in the next twenty or thirty years, I’ll say that.

In fact, a lot of the depictions of technology in this novel would probably be a lot more at home in a book taking place in 2099. It wouldn’t lose anything in terms of setting or plot, either. I wonder what made the authors think that the more immediate future would make for a better story. I don’t think it would have mattered either way, and in fact it looks a bit more silly as it is. Of course, I’m coming from a viewpoint of fourteen years past this book’s projected future, and hindsight is 20-20, so there you go.

I wish we had gatling lasers. All I’m saying.

Sol and Myra are tasked with scraping together a ragtag force to enter Texas and bust out the President of the United States, who has been captured for some unexplained reason. Their plan is to use a bunch of captured Texan tanks and artillery and sneak in, disguised, where they can cause some havoc. I guess it’s basically a Trojan Horse gambit, but it needs a better name.

For a book with so many Jews in it, this book didn’t do very much that I’d call Jewy. Sure, the tanks had names like The Walls of Jericho and Jehovah’s Wrath and stuff, but I feel like maybe the operation should have been called something like Operation Lion’s Den. That would have made a lot of sense.

Also, this book had absolutely no Yiddish in it. The Jews depicted in this book were in fact the least stereotypically-depicted Jews in literature up to the present day. Part of me is impressed, but part of me is a little disappointed. I wanted a book where Woody Allen has to ride a tank into Texas to save Jackie Mason.

The actual enacting of the plan goes pretty well, actually. In fact, I’d say one of the downsides of  the book is that the Texans are portrayed as so incompetent that there really isn’t much in the way of suspense in the book. What kept me reading is the hopes of finding out what craziness is going on in the post-apocalyptic world outside of the events of the book. Those things were handled pretty well.

Nothing ever comes up that really tests the main characters. They’re overcompetent, I suppose. Sure, there are some minor tense moments, like when the questioning by a border guard gets a little too direct or when it seems like one of the members of the team is about to crack and spill the beans, but those things are handled with a surplus of grace and aplomb that would put any actual human being to shame. Never once do I feel like the characters might, in fact, fail.

This fact is made worse by the fact that some of the Texans, a group called The Sons of the Alamo, are supposed to be the big bads in the book. They’re actually described as something like the closest thing to the Gestapo America has ever produced. We see a grand total of one of these guys, and all he does is interrogate Myra by breaking her ankle. He’s stopped from progressing any further by the commander of the base, who is in fact a decent human being.

Most of the Texans, except for Ricky-Bob Himmler there, are actually depicted as pretty regular folks. They’re fighting not because they’re loony or even extremist, but just because they feel that Texas is their home and they’ll go to any lengths to defend it. Partly they’re doing what they’re doing because of the propaganda machine of the Sons of the Alamo. And our heroes recognize that, too. They actually feel bad for killing some of these people when the big breakout happens. Everybody’s basically human in this book, and I can respect that.

Well, one person is like unto a weasel, I suppose. The United States is being run by the captured president’s VP, a guy who is depicted as vain and incompetent. Part of the reason why this mission is so vital is less to deal some kind of blow to the Texan secessionists and more to get the really useless guy out of office bloodlessly. This part of the plot really only came up twice: once when it was being exposited at the beginning of the book and once at the end when the real president shows up. I wasn’t sure at all why that part of the book even needed to be in there. It didn’t add all that much to anything.

But yeah, the plan comes together just as well as you’d expect of highly trained Israeli mercenaries with gatling lasers. They manage to take out the base and rescue the president, therefore solidifying their positions as Bad Dudes. And there it all ends.

Honestly, I feel like the plot of this book really could have used some work. It wasn’t as awful as some books I’ve read, but it was barely even there. Much better than the plot, though, is the world surrounding it. It was actually fairly plausible, if a bit far-fetched. I think well thought-out is the best way to put it. I was much more interested in the everyday things going on in the vastly depopulated United States than in the exploits of the heroes. How was the nation staying afloat? How were people surviving? What has become of industry, of the environment, of other nations? A lot of those questions were actually answered. The environment, notably, is making a rather astonishing comeback after the War. Trees are popping up again, there are very few cars so things like smog have started to dissipate, and so forth.

Probably the best part of the book is a side note on the story of the first men to visit Mars. They were about halfway there when word reached them that war had broken out, and they had to decide whether they should keep going or turn around and head back. They decided, rather heroically, to continue the mission. They flew to Mars, became the first human beings to walk on its surface, completed their mission of exploration and science, and then came back home to find the world almost as lifeless as the Red Planet they’d left. Because they didn’t have anybody to guide them back to the surface of the Earth, one of the astronauts died in re-entry, and another one was killed in the War some months later. Nobody knows what happened to the other two.

See, that story is actually pretty good. I would have read that story. In a way I guess I did, but I think that book would have been better if these guys had written it.

So yeah, for a book so light on plot, The Texas-Israeli War: 1999 actually had some pretty good writing. I wasn’t moved by the parts I was probably supposed to be moved by, though.

And just to get it out of my system: Oy vey, meshuggah, alter kocker, kvetch, gevalt, schlep, schlemiel, schlock.