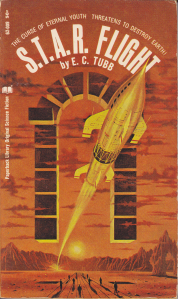 The Kaltichs also promise to sell their secret for instantaneous space travel desperately needed by a barbaric, overpopulated Earth.

But decades pass and Earth is no closer to the stars. Yet the Kaltichs continue to strip Earth of its riches and its pride.

Only the Secret Terran Armed Resistance movement opposes the Kaltich tyranny. And only Martin Preston, S.T.A.R. agent, can possibly steal their secrets. If he fails, Earth will become a planet of billions of starving people—with no place to go except to their graves!

Okay, this book seriously has it all. A rockin’ story, great universe, some twists, and characters that aren’t completely intolerable. What else is there to say?

S.T.A.R. Flight starts out by introducing us to Martin Preston. Martin’s currently on vacation somewhere in Germany, at some castle that doubles as a perpetual Renaissance Faire. He’s gearing up to go see the joust when he meets a Kaltich dude. The Kaltich, we learn, have been running the planet for some time and they’re not exactly gracious about it. Even the lowliest of the Kaltich thinks they’re way better than any Earthman.

Yeah, this book has a lot to say about colonialism, I think. It even directly references and draws comparison to the coming of the White Devils to America and their consequent treatment of the natives there.

What’s more is exactly how the Kaltich keep their human servants in line. This part, I thought, was brilliant. The Kaltich have the secret of eternal youth. Every ten years or so, a person can apply to get replacement organs and a sort of rejuvenation procedure done to bring them back around to thirty years old, metabolically. People who offend the Kaltich get denied this procedure. This can, of course, apply to entire areas of the world, or to the planet Earth at large. People aren’t going to just give up eternal life so they can kick some Kaltich dude’s ass for looking at his girlfriend funny, so people stay cowed and subservient.

As soon as I pointed out this stuff to my roommate, he said something to the effect of how much this sounds like an abusive relationship. And he’s definitely right. One party grants benefits so long as the other puts up with all the bad stuff the first party dishes out. You can apply this situation to a whole variety of relationships, too. Take, for instance, a bad employer saying that an employee can lose his or her job for pointing out gross incompetence or illegal activity. A drug dealer keeping his customers in line. Abusive parents. Colonialism. It’s all there, summed up nicely in the way that only science fiction can do it.

Anyway, back to Martin. This Kaltich dude says some rude things to him, and Martin goes off to buy a ticket to the joust. At the front desk he gets a message that simply reads Lewis Carroll. The code is a reference to the Walrus’s statement about how the time has come to speak of many things. They’ll never crack that one.

Martin has to skip out on the joust, which is a shame. What’s not a shame is how he gets back to New York. He hitches a ride on an ICPM. That’s right, an Intercontinental Passenger Missile. People in this world ride missiles around the world. If you aren’t sold on how awesome this book is, you really should be by this point.

Martin is an agent of STAR. Oddly enough, while the title of the book uses periods, the text of the book does not. STAR is in oppositition to the Kaltich occupation, as well as the forces of UNO, who are sort of an appeasement sect. The Kaltich keep promising that as soon as humanity is “ready” they’ll be given the secret of space travel. STAR figures this is all a ruse to keep humanity in line. UNO takes them at their word. Stay tuned for even more fun with acronyms.

Martin’s mission, should he choose to accept it, is to infiltrate the Kaltich and steal for humanity the secrets of the Celestial Gates (the Kaltich method of space travel) and eternal life. They reveal that they’ve captured a Kaltich dude that happens to look a lot like Martin, so they’ll just steal that guy’s clothes and send Martin back to the Kaltich homeworld or wherever to grab some secrets and come back home. Easy enough, right?

What follows is some of the worst luck ever to fall on a fictional character. For starters, the Kaltich society is heavily stratified along some Brave New World lines, even down to referring to people as Alphas, Betas, Gammas, and so forth. The guy they managed to disguise Martin as was a Delta, which means that almost as soon as he sets out on his mission he manages to get caught by an Alpha who starts lording it over him. Martin manages to kill that Alpha and steal his clothes, figuring that no one will dare question what he’s doing since he’s the next best thing to God for these people.

Things go well for a bit. Martin steps through the Celestial Gate and winds up on a world full of American Indians. I wondered if perhaps we’ve gotten to the limits of E.C. Tubb’s imagination and every planet is subject to Star Trek rules. Martin seems to think it’s a bit strange, too, so maybe there’s hope.

Martin meets “another” Alpha, who gets him drunk and shows him around the universe a bit, taking Martin through gates to all sorts of worlds. The worlds are numbered and many of the ones we see are in the thousands, so we get a pretty good look both at how many habitable worlds there are and just how many of those worlds are under the control of the Kaltichs.

Things go sour when the Alpha Kaltich reveals that he knew Martin was an imposter all along and sends him to the authorities. Martin is promptly tortured and interrogated and tortured some more and whipped and tortured. Also imprisoned.

He escapes his prison cell and manages to kill the guy that was torturing him but not without getting shot himself. Boom, right in the chest. Martin’s dead, people.

Okay, not really. He wakes up in a hospital after a nearly total organ replacement. He later learns that this isn’t just any hospital. He’s found himself on…Hospital Planet.

Hospital Planet is, it turns out, the source of the Kaltich’s eternal life technology. The Kaltich are more like interplanetary traders, using their monopoly on travel to spread around the technology they gather, using it to keep lesser civilizations under control. Learning this, Martin gets recruited by this planet’s own resistence movement. Remember how I mentioned that the acronymic fun wasn’t over yet? The resistence movement on Hospital Planet is called GERM.

GERM has managed, over the course of about eighty years, to piece together all the knowledge needed to grant a civilization access to the Celestial Gates. They aren’t able to build them themselves since almost all of their technology and culture is devoted to medicine. And right about here is where the hammer drops.

It turns out that the Celestial Gates aren’t pathways through the stars at all. It turns out that the people on this planet refer to their planet as Earth, as well. GERM stands for General Earth Resistence Movement. Martin learns that the Kaltich don’t control travel between planets, but between alternate realities—different versions of Earth. An infinite number of them.

I’ll be honest, I started to suspect that this was the case a bit before the big reveal. The meaning behind GERM was revealed quite a bit before this reveal, and while Martin sat there thinking “What?!  Earth?!” I was like “Ohhh, right, yeah.”  I’m not saying I’m a genius or that Tubb handled it inexpertly, it’s just that I’ve read enough science fiction to know that parallel Earths are a thing that happen sometimes, and Tubb dropped enough hints throughout that I was able to pick up on it pretty quickly. I wonder if in 1969 this was a wacky and crazy idea, and if so, I wonder how much this book might have contributed to making it fairly mainstream as science fiction concepts go.

The Hospital-Earth people manage to help Martin escape back to his Earth, whereupon he meets up with his STAR associates. But wait! It turns out that one of the people who sent him, a higher-up in the organization, is actually a traitor, or a double-agent, or something! She’s been playing him all along, using his attempt to infiltrate the Kaltich as a sort of white-hat hacker activity, learning where weaknesses in Kaltich security lie so that she can suggest to somebody that they fix them. The fact that he got as far as he did, killing an Alpha in the process, is what he manages to dangle over her head to keep her at bay for a bit while UNO agents roll in. It turns out that all this time, UNO has been making some changes of their own, and they’re sick and tired of the Kaltich. Martin runs off with them while their leader points out that with the knowledge Martin has brought back, they can have Celestial Gates open within a few years, with all the infinite Earths open to them.

So yeah, that’s the book. Even the ending was pretty good, which is odd. I usually hate endings to books, since they so often feel like the author figured “Okay that’s enough” or “I’m bored now” or “I really need to get this in by tomorrow.” Tubb ended his book with just the right amount of closure, yet with enough open-endedness that I want to know how things will turn out.

My initial scare about cowboy and gangster planets was, of course, solved by the whole multiple-Earths reveal. History went differently on some of these Earths so that maybe Europeans never landed in America or Rome never fell or sorts of things like that. We basically get the Alternate Historian’s wet dream. The history of Hospital Earth is delved into a little bit, detailing that world’s treatment of Ignaz Phillipp Semmelweis. In our world, Semmelweis’s radical “Wash Your Hands Before Touching Babies” argument was derided at the time, leading Semmelweis to die broke and nearly unknown. This really happened. Look it up on Wikipedia. I even linked it for you so you have no excuse. History is terrifying.

Anyway, on Hospital Earth Semmelweis is basically Jesus and George Washington all rolled into one. It’s a little bit of detail that I really liked.

The commentary on colonialism is of course made more explicit when it’s revealed that even the Kaltich are human, so all the bad things they do are in fact to other humans. The book spends so much time setting them up as some kind of inhuman big bad and then reveals that all they’re doing is basically what people have done to each other on our planet since time immemorial. Man’s inhumanity to man and all that. Maybe a bit heavy-handed, but I’m willing to accept that as long as the story is good, and this one definitely was.