Thanks to the wonder of the hide, no one starves or freezes or gets sick on the perfect worlds of the Solarian Alliance. Like a synthetic skin, the hide protects and heals, and can transform people into anything they want to be. Nothing threatens this wondrous utopia until an extraterrestrial message of unspeakable horror is received. An evil race terrorizes the galaxy, and it’s coming toward Earth….

Into this world the Solarian Alliance frees Krim, the last survivor of the Beat asteroid known as the Jack and a prisoner since he saw his world vanish into that strange other space known as Ur. Disgusted with this utopia, Krim enlists in the distant fight at the edge of the solar system, the battle no one on Earth may know about, lest it disrupt their perfect peace…the Hidden War.

END_OF_DOCUMENT_TOKEN_TO_BE_REPLACED

Hello, friends! Today we have a very special post, a guest post! Constant readers might remember Philip Stiff as being the blesséd soul who sent me the Star Quest books at the end of 2015. It seems he’s found something of his own to review. Something that, I have to admit, I’m jealous I didn’t find first. I hope you enjoy his review as much as I do. 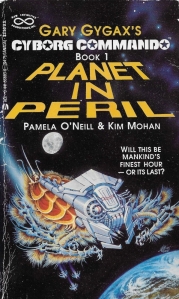 Cris Holman’s world is turned inside out when insectlike aliens attack and destroy his hometown, murdering his family and his friends.

Motivated by vengeance, Cris volunteers to become a Cyborg Commando, a new breed of soldiers who allow their brains to be removed from their bodies and placed inside computer-operated fighting machines specially designed to combat and conquer the alien menace.

As Cris Holman’s body lies in cryogenic storage, the new Cris is dispatched to help defend the planet – before all of mankind becomes subjugated to the awful plans of the aliens. He and others like him are Earth’s best defense…and its last hope.

END_OF_DOCUMENT_TOKEN_TO_BE_REPLACED

YOU are John Strong, an elite “on call” agent working with the CIA, sent to find a U.S. spy satellite that crashed in Vietnam. The satellite’s memory banks contain information on Soviet Space technology, and the Russians and their Vietnamese friends will do everything they can to stop you…

To be successful in this adventure, you will have to make snap decisions under pressure, using your abilities of stealth, gun-firing, hand-to-hand combat, and bomb-throwing to reach your objectives. Prepare yourself for adventure and combat with VIET RAMPAGE.