The Martian Viking by Tim Sullivan 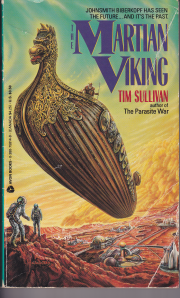 Earth’s new order has declared non-productivity a crime—dooming Johnsmith Biberkopf to life imprisonment in a Martian penal colony. Sentenced to a life of never-ending toil and despair, he seeks escape in the hallucinogenic power of “onees”—a government-banned substance that will lead Biberkopf through the portals of a strange and timeless dimension where ancient Viking ships sail the cosmos…and illusions become uniquely, terrifyingly real.