The Road to Mars: A Post-Modem Novel by Eric Idle
Pantheon Books, 1999
Price I paid: Some Amazon funny-money

What makes humans bark?
Is the funny bone funny?
What is the algebra of comedy?
Did the sitcom originate with the ape?

Carlton is an android (a 4.5 Bowie Artificial Intelligence Robot) who works for Alex and Lewis, two comedians from the twenty-second century who travel the outer vaudeville circuit of the solar system known ironically as the Road to Mars. His problem is that although as a computer he cannot understand irony, he is attempting to write a thesis about comedy, its place in evolution, and whether it can ever be cured. And he is also studying the comedians of the late twentieth century (including obscure and esoteric acts such as Monty Python’s Flying Circus) in his search for the comedy gene.

In the meantime, while auditioning for a gig on the Princess Di (a solar cruise ship), his two employers inadvertently offend the fabulous diva Brenda Woolley and become involved in a terrorist plot against Mars, the home of Showbiz.

Can Carlton prevent Alex and Lewis from losing their gigs, help them overcome the love thing, and finally understand the meaning of comedy in the universe? Will a robot ever really be able to do stand-up? As Einstein might have said, nothing in the universe can travel faster than the speed of laughter.

from the jacket flap

END_OF_DOCUMENT_TOKEN_TO_BE_REPLACED 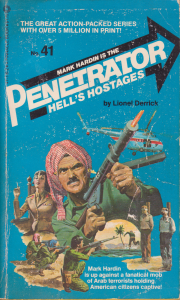 Mark Hardin takes on one of the most explosive challenges of his career―on foreign turf. Crazed rebel students, under the banner of the self-styled prophet Ayatollah Kohbali, have gone wild and imprisoned a staff of American diplomats in the consulate―an impenetrable compound.

A mysterious KGB agent―in skirts―is taking orders from the Kremlin and passing them on to the rebels. Somehow, she’s always one step ahead of the Penetrator and his special team of trained fighters―and Hardin smells a rat.

He’s got to figure out―and fast―how to match sharp wits against raw violence if he’s ever going to break through the wave of Muslim madness!