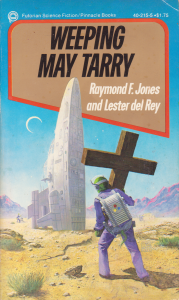 The landing was unlike any they had ever made. But then they had never before seen a planet so strange as this one—with its wild seas, scarred plains, and rubbled cities. It looked as if it had been totally devastated by some type of nuclear destruction.

And they were most curious—these aliens with their green-scaled faces and stubby tails—to explore this peculiar place where man had once existed…until their ship exploded and they were stranded with no means of survival and no hope of rescue.

Unless their high priest—Ama of the Keelong—prayed to the higher power they had rebelled against. For this was a spiritual mission…and the Alcoran had lost their way…

END_OF_DOCUMENT_TOKEN_TO_BE_REPLACED

The Mansions of Space by John Morressy
Ace Science Fiction, 1983
Price I paid: $1.50

Jod Enskeline, master of the driveship Rimjack, was a free trader traveling from one alien planet to another in his restless search of the universe.

Then he landed on Peter’s Rock, a forgotten planet of humans, ruled by priests and harboring a treasure of books holding all the extinct languages of Earth. The books would bring Jod a fortune, but in return for this uncountable wealth, he must take priest-voyagers on a dangerous mission—to find the Holy Shroud, the last relic of an ancient faith lost somewhere in the universe!