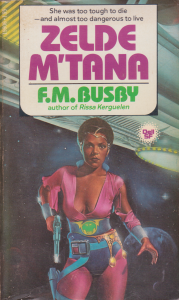 Young, untried, but a lethally trained fighter, Zelde M’Tana found herself legally shanghaied by the oppressive UET―imprisoned on a starship bound for the brothels of a mining planet. There was no way Zelde was going to stand for that―and when the ship’s first officer, Parnell, led an anti-UET revolt, Zelde joined the mutineers and single-handedly turned defeat into victory.

First as Parnell’s lover, then as his assistant, Zelde was mistrusted by the crew―but when the UET struck once again and Parnell died, there was only one choice for Captain: Zelde M’Tana.

Pungent and vivid as its heroine, ZELDE M’TANA is a gripping epic of spacefaring, battle, and human conflict.

END_OF_DOCUMENT_TOKEN_TO_BE_REPLACED

Cycle of Fire by Hal Clement 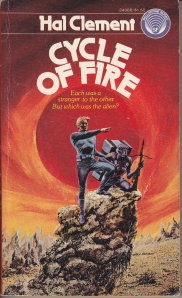 Nils Kruger was the Earthman. A castaway with a smashed spaceship on the parched surface of the inhospitable planet Abyorman.

Dar was his non-human castaway companion. But Nils, a latter-day Robinson Crusoe, quickly learned that his intended Man Friday was a superior creature.

They would both die.

Typically, Nils the Human opted to do something about it. Typically, Dar, who knew the day, date, and hour of his death in advance, opted to do nothing.

Which of them was right?

Or, perhaps both of them were!