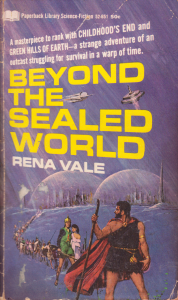 Beyond the Sealed World by Rena Vale
Paperback Library, 1965
Price I paid: none

“DALY 1444 IS AN ATAVIST. CAST HIM OUT OF THE SEALED WORLD INTO THE WASTELAND TO DIE.”

Thus ordered the masters of Science, the ruling body of the Glasteel Civilization. And so Daly 1444, convicted of primitive longings to be a man instead of a number, was forced to become an Opener—a fearful voyager into the dangerous world of natural sun and light outside his antiseptic culture.

To his great surprise, Daly found not one but several worlds—each at a different level of achievement, each incomplete without the other, each desperate to rule supreme. At first he struggled only for his own life amidst conditions for which his test-tube life had ill-equipped him. But soon he realized that not only his future was at stake, but the future of all the worlds of Earth—and he was the one man who could save the Universe!