Of Men and Monsters by William Tenn
Ballantine Books, 1968
Price I paid: 90¢

Eric the Only was anxious to become a man…eager to perform his initiation Theft from the Monster World and be accepted by the elders of his small tribe.

Then the women would notice him…and one woman in particular might begin to take him seriously.

He had learned well the rules of stealing. He had long anticipated his just rewards. He had carefully plotted and schemed. He had minimized all the risks.

But though Eric understood the merciless ways of the Monsters who had long ago driven his people into the wretched burrows, he could not anticipate the treachery of men.

END_OF_DOCUMENT_TOKEN_TO_BE_REPLACED 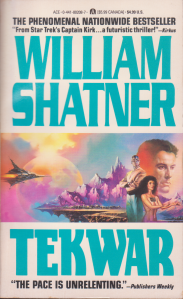 Known to millions as STAR TREK’S Captain Kirk, actor-director William Shatner now turns his talents to a stunning novel of future shock. TekWar is the story of ex-cop Jake Cardigan, who’s framed for dealing an addictive brain stimulant called Tek and sentenced to fifteen years of suspended animation. Now, mysteriously released after four years in the “Freezer,” Cardigan is on the loose…and out for justice.