Gremlins 2: The New Batch by David Bischoff
based on the screenplay written by Charlie Haas
Avon Books, 1990
Price I paid: 90¢

KEEP AWAY FROM BRIGHT LIGHT,

FEED THEM AFTER MIDNIGHT!

Who would have thought that within every playful, cuddly Mogwai there lurked a gleefully, malevolent gremlin? Billy Peltzer and his girlfriend Kate Beringer found out the hard way—and it nearly destroyed their hometown of Kingston Falls. Now the young lovers have come to New York to seek their fortunes. But the towering, high-tech office building in which they work is about to become a breeding ground for a whole new batch of deliciously malicious creatures.

END_OF_DOCUMENT_TOKEN_TO_BE_REPLACED

Though basically a skeptic, William Reynolds had known out-of-body experiences in the past. But never before had he floated past the boundaries of Baltimore…and across the borders of time. And now, with the fires of Civil War looming on the horizon, the astonished graduate student was hobnobbing with none other than the dark poet Edgar Allen Poe. But their meeting of minds was to have chilling consequences. For a desperate Confederacy planned to use them both to remold the world—and to change history…for the worse.

END_OF_DOCUMENT_TOKEN_TO_BE_REPLACED 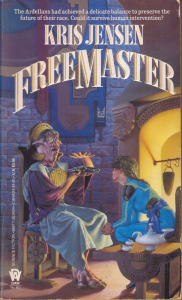 had sent Sarah Anders to Ardel to establish a trade agreement. For the very sands of this world were laden with materials vital to offworlders but of little value to the low-tech Ardellans. Unfortunately, the Union was not alone in seeing the worth of the planet. Other, far more ruthless humans were about to stake their claim with the aid of forbidden technology, treacherous double-dealing, and threats of destruction to the clans of Ardel.

Alone, Sarah could not stand against this mercenary invasion. Yet the Ardellans had defenses of their own, powers which only a human such as Sarah could even begin to understand. For she, too, had mind talents locked within her, and the FreeMasters of Ardel just might provide the key to her long-dormant abilities. But the Ardellans were also fighting to preserve the slowly diminishing population of their clans and Houses. And Terran interference—even that of a human who was on their side—just might push them past the point of no return….

END_OF_DOCUMENT_TOKEN_TO_BE_REPLACED

The Pursuit of the Phoenix by John-Allen Price 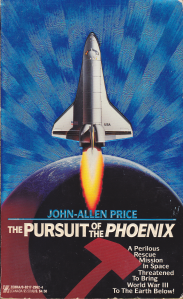 Rising on twin pillars of white-hot fire, the U.S. space shuttle Phoenix curved up from its Cape Canaveral launch pad into a low-altitude orbit around earth. The crew’s mission: train and instruct three fledgling French astronauts in the secrets of space flight. But short hours after liftoff, Commander Ed Cochran knew he must scrub the mission for a far more perilous task—the rescue of three Russian cosmonauts suddenly trapped in orbit in a space-debris-damaged Soyuz space capsule, its heat shield gone, its fuel depleted, and its supply of life-giving oxygen rapidly running out.

Or so Cochran thought—until the Politburo abruptly declined Phoenix’s offer and the White House threatened that any rescue operation might set off the beginning of World War III. As the three Soviet cosmonauts televised their last good-byes to a waiting world below, Cochran suddenly realized that the differences between men who challenged the deadly hazards of the space frontier and those concerned with bureaucratic politics on the earth below much finally be resolved—even if it meant the risk of turning the world into a radioactive cinder to which there would be no return!