END_OF_DOCUMENT_TOKEN_TO_BE_REPLACED

A fair exchange can be robbery—sometimes. Count Guido della Faziola wanted my body. I wanted the pictures that were hidden in the stateroom of his luxury yacht, I would give him the flesh fest he wanted. But the Count was not likely to hand over the negatives even in exchange for little old me, I was going to have to steal them. My skin tight evening gown with its low, low-cut bodice was an open invitation. The Count’s hand accepted the invitation. Oh, well, I, was in the service of my country. Vive la patriotism!
“Come into my stateroom, cara mia,” he breathed into my ear.
“Yes, let’s,” I breathed back. “I’m going to love you to death.”
Little did he know….

END_OF_DOCUMENT_TOKEN_TO_BE_REPLACED

That was The Black, where men were punished for challenging minds more powerful than their own. The detective from Earth feared The Black more than any torture his own planet could conceive. But he had to uncover the sinister plot that threatened Earth and all its people.

END_OF_DOCUMENT_TOKEN_TO_BE_REPLACED

Paperback Library, 1967
Price I paid: none

For 7,000 years the domed city of Carthage has protected its citizens from the ice-covered world outside. But now Gaul Kalmar, a brilliant engineer, discovers that the entire planet is habitable. Tormented by the dehumanized tyranny of life in Carthage, he enlists the aid of seven other rebels in a desperate attempt to escape.

Not only are the group’s actions observed by the ever-present Monitors of Carthage, but even their innermost thoughts are recorded by the Secret Police. Yet they are ready to take any risk to win their freedom, even when Kalmar must announce: “The city has an anti-hostility screen. Nothing with a human heart can cross it!”

END_OF_DOCUMENT_TOKEN_TO_BE_REPLACED 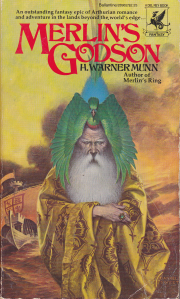 Originally published as The Ship from Atlantis, 1967

Camelot was gone and Arthur lay in the sleep of the forever undead. Only a small band of loyal men were left, guided now by the magical wisdom of Merlin. United, they braved uncharted seas toward the mysterious Lands of the West. With them they carried the Thirteen Magic Treasures of Britain and the power of Merlin’s Ring.

Ahead of them lay unknown lands that offered lush wonders and ecstasies beyond their dreams and savage creatures that drove them into horrors beyond any nightmare.

For Ventidius Varro, a Roman centurion who had given his service to Arthur, this was to be an odyssey of soul-stirring glory and heartbreaking discovery….an odyssey that would bring him the love of a beautiful woman and take from him his son Gwalchmai.

And before Gwalchmai, godson of Merlin, lay an even darker and more mysterious quest.

END_OF_DOCUMENT_TOKEN_TO_BE_REPLACED

Assassins from Tomorrow, by Peter Heath

The mystery of the Kennedy assassination has attracted many amateur investigators—but none quite like young Mark Brown, the brilliant but footloose young son of America’s leading theoretical physicist. Like others, Mark Brown had only a theory to work on. Unlike others, his theory led him straight into trouble—and into even deeper mystery…

Mark Brown needed help—and that help could only come from Jason Starr and Adam Cyber, the Mind Brothers. The three made up a team of scientific brains unmatched in human history—but the problem they faced was enormous. The complexities included a mysterious artificial satellite and a weird organization called “Sutra”…and the only thing certain was that at least one of the three would die. The biggest question was whether the Earth would die, too….

END_OF_DOCUMENT_TOKEN_TO_BE_REPLACED

The Mind Brothers by Peter Heath

Jason Starr, genius, found himself the focal point of a complex Communist plot against America…and as a thoroughly discredited scientist, there seemed to be nothing he could do about it.

Not until he was joined by Adam Cyber, that is. Adam Cyber: last man—or superman—to survive in that bleak future; and Jason Starr’s Mind Brother. Cyber returned through millenia to try to change Earth’s course. And when the Mind Brothers met, computers went crazy, all predictions were worthless—and a new kind of spy was born!