Buck Alice and the Actor Robot by Walter Koenig 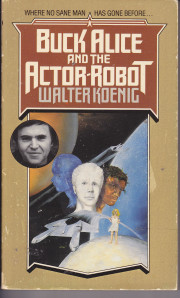 BUCK ALICE AND THE ACTOR ROBOT takes a wry and insightful look at human behavior after apocalypse. Mr. Koenig finds that people remain human—both mean-spirited and heroic, both aimless and persistent—in the gravest circumstances. It’s a complex worldview, all articulated in a well-conceived science-fiction thriller.
—Leonard Nimoy

I suppose there comes a time in every Star Trek actor’s life when they decide they have to write a book. Sometimes they release a memoir or an autobiography, like Nimoy’s I Am Not Spock and I Am Spock. Sometimes they give us fictional epics like Shatner’s TekWar. The stages in the life of a Star Trek actor are, in fact, as follows:

I’ve wondered about this for a while, to be honest. Sometimes I’ll be walking through the bookstore and see a new fiction entry by LeVar Burton or George Takei, and I just have to wonder why it is that everyone from Star Trek ends up writing a book. Is it the time they spent working with great writers from Theodore Sturgeon to Dorothy Fontana? Could it be that after Star Trek, it’s pretty hard for an actor to find steady work, and so they need to supplement their income with book royalties? It’s certainly curious.

Walter Koenig’s entry into this trend is, simply put, all over the place. I’m having trouble figuring out where to start. The title alone had me hooked, and I probably would have picked the book up without Koenig’s name on the front cover, but wow. This book is a train wreck.

The book starts off by introducing us to Joshua Chaplin, the first character in a rather large ensemble cast. Joshua, like most of the other characters in the book, isn’t especially likable, although he’s more likable than most. He’s a daydreamer who fancies himself a hero, although he’s not particularly heroic. He’s basically Walter Mitty, I guess. Joshua’s heroic aspirations get him into trouble, however, when a prankster little kid tells him that a baby fell into a storm drain. Without thinking, Joshua plunges into the storm drain to the rescue as he hears maniacal laughter from above. He then decides, for no reason that I could find, to stay down there for a few days. During that time, the world ends.

A group of aliens, the Milliginians, have decided that they rather like Earth and want to take it from us. These aliens, we learn, are exactly like humans in every way except for being blue and having a “seventy-five year head start.” Burdened by heavy overpopulation and learning that Earth would be perfectly habitable to them, they head on over and vaporize the majority of humanity in one fell swoop. Joshua Chaplin, being in a sewer at the time, is spared.

Joshua comes on out and wonders what the heck is going on. He survives alone for a while until he meets a girl. This girl tells him that there is an enclave of survivors in the Florida Everglades, but she didn’t like what was going on down there so she ran away. She then dies. Joshua figures he might as well head down that way.

We then cut to the survivors in their settlement of New Hope. The titular Buck Alice is there, along with some other easily forgettable characters. There’s Isobel, a teenager who is the most inhuman monster in the world, but is the best hope for humanity’s survival, since all women that had passed puberty at the time of the invasion were rendered either sterile or into dust. There’s Robbie, an ex-private eye who is the de facto leader of the community at the start. We are given some details of the daily life of the people of New Hope, their philosophy of extreme individualism, and the fact that they occasionally have orgies for no real reason. None of these people are even remotely likable, and we’re given backstories on all of them.

Outside of New Hope there’s another community sprouting up, a group of ex-mobsters who are also ex-boxers and are also given in-depth backstories.

We also see the point of view of one of the aliens, Imhor. We get his backstory.

This book was 245 pages long. The first half of it was assorted backstories. These backstories all blended together because none of the characters were in any way memorable or appealing. I might catch some grief for this, but I’m just gonna be honest here. It sort of reminded me of James Joyce’s Dubliners. We see all these little snippets of lives, most of them tragic, all of them remarkably human. Whereas the plot of this book doesn’t make an awful lot of sense, Koenig actually writes his characters fairly well in a sort of misanthropic way. They don’t do anything wildly out of character, because to Koenig, anything goes, and he makes that clear. Human beings are pretty much insane most of the time and are liable to do any number of really stupid, tragic things. The book’s characters don’t really make much sense because people don’t really make that much sense.

If Koenig’s goal had been to produce a series of character sketches with a sort of sci-fi twist, he would have succeeded. As it is, the plot kicks in, and things sort of break apart.

We finally meet the Actor-Robot around midway through the book. He’s not really a robot. I feel cheated. He’s actually an actor who played a robot so well that he became convinced of his own robotic nature.

It was at that point that I gave into the temptation to see if maybe Walter was drawing these characters from real life, namely from his colleagues at Star Trek. To Mr. Koenig’s credit, I couldn’t find all that many parallels. The obvious Actor-Robot comparison was Nimoy, although The Next Generation had premiered by this point so maybe he was looking at Brent Spiner. It didn’t really hold up, though. I don’t think there were any intentional digs against Walter’s co-stars in the book.

Anyway, the Actor-Robot (who is, I don’t think, ever given a name beyond that), is in opposition to Buck Alice, a science fiction writer with delusions of grandeur and rabid anti-Communist tendencies. All Buck Alice really wants to do is rule the place, while the Actor-Robot is just somehow opposed to him. I never really understood why. This plot, despite being the title of the book, is only a small portion of it and doesn’t really make all that much sense.

Back to Joshua, who has been abducted by Imhor and taken to the Milliginian space-ship, where he’s treated comfortably and meets a beautiful Milliginian woman named Loinine and has a pretty good time with her, until its revealed that she’s not real and he’s been pleasuring himself this whole time with a hallucination created by the Milliginians. Shades of “The Cage” here, I guess. Upon learning the truth, Joshua flees.

The truth is that the Milliginians are having trouble adapting to the Earth and figure they should probably just leave. A few of them are annoyed that they wiped out a species for no good reason. It’s discovered that the Milliginians trouble is with Earth’s atmosphere. The rigors of space travel have somehow lowered their bodies’ resistance to electricity, and Earth has too much electricity in its atmosphere, so they’re all suffering from organ failure from prolonged electrocution. As sci-fi babble goes, that’s pretty good. Their goal, then, is to take as many of the surviving humans as they can and steal their organs for transplant. It’s a plot straight out of a 50s B-movie, but then it just ends. Joshua runs away, and we don’t see him or Imhor again until the end of the book.

In the Everglades, things are coming to a head. Isobel is supposed to be mated off to all the surviving males, in the hopes that there will be enough genetic diversity left to restart humanity. Her first would-be suitor is Buck Alice, but she refuses him. This setback causes Buck to split off from the main group with a few followers, forming the town of Newer Hope, and he decides that his real goal is to be the President of the United States for no adequately explored reason.

The ex-mobster/boxers finally encounter the townsfolk, and one of them abducts Isobel and starts a weird relationship with her. They decide to make themselves King and Queen, which annoys Buck further, and things begin to come to a head until Imhor and Joshua show up out of nowhere and the book ends.  Yes, seriously.

I’d like to think on a subsequent reading of this book the plot would begin to crystallize and make sense. I doubt it, though. I can’t make heads nor tails of what happened in this novel. The backstory segments were the only parts that had any coherence to them, and not much of it.

A common theme in all the characters was ugliness and a sense of isolation. Only one character was described as being in any way physically attractive, and that only served as a marker of his differentness. Isobel, the last surviving fertile woman, is described as being physically abhorrent and utterly unpleasant. Buck Alice puts people in mind of a turtle. Joshua keeps going on about his big butt and cowardice. One character whose name I forget made a game out of figuring out why people were alive. The dregs of society were there to keep the slightly-more-fortunate from despairing, and so forth. The only person he couldn’t figure out was himself. This sense of being unable to belong to anything is inherent to every character in the book.

All of this comes back to the prologue of the book, wherein Koenig basically apologizes to his audience for the book being completely nonsensical. It would seem that he wrote the novel during a particularly low point in his life. He says that circumstances seemed to be constantly going against him, which set him into a sort of panic mode. When the circumstances improved, the panic mode didn’t seem to, so he realized that he was essentially off-kilter by nature. This is reflected in each and every character in his novel. If anything, the novel succeeds at revealing how we respond to trauma and misfortune much better than it reveals how books work.

A final point before I’m done. It’s well-known how Walter Koenig tried to distance himself from Star Trek after the show had ended. This book is, I think, one more step in his attempts to do so. But even that was taken away from him. Look at that cover: there’s a picture of him prominently displayed as if to say CHEKOV WROTE THIS BOOK, there’s the tagline about “Where no sane man has gone before” (which doesn’t fit the book at all), and a blurb on the back by Leonard Nimoy instead of any kind of plot summary (of course, I’m having trouble summarizing the book, and I read the damn thing). Try as he might, Walter Koenig just couldn’t get away from Star Trek because no one would let him. It’s tragic, really. The book reflects that tragedy, and in many ways it reflects some of the basic tragedies of being human.

But it didn’t make a damn bit of sense.

5 thoughts on “Buck Alice and the Actor-Robot”